All over Britain you will find magnificent castles in all shapes and sizes. With literally hundreds of castles scattered throughout Britain, there is no lack of options for an enthused traveler to explore. I have toured these countries from end to end and to help you find the castle you really want, I made a list of the most historic and best castles in England, Scotland, and Wales.

For a complete travel guide to England, Scotland, or Wales – sourced from local experts and built just for you – check out Guidester how they will save you time and help you see more! My all time favorite castle in Britain is Arundel castle. One of the largest, best kept, and most intriguing castles, you will be awstrauk upon arrival. Built at the end of the 11th century by Roger de Montgomery, Earl of Arundel, this fortress houses the ancient Howard family who serve as the stewards of the throne should something happen to the royal family.

The castle is located in in the small village of Arundel overlooking the River Arun.  Arundel is just 45 miles south of London, with easy access by car, train or bus. Make sure to allot at least a couple hours to this castle, because once there you will not want to leave.

The Guidester Difference: There are several other incredible gems in and around Arundel that your personal travel guide would be sure to point out – ensuring you don’t miss out on anything!

Did You Know? The Howard family played an important role in English history, from the Wars of the Roses through the Tutor period. Members of the Howard family still occupy the house, therefore you are not permitted to explore the entire castle, but the large majority of the good stuff is open to the public, as well as the castle gardens and grounds. Perched on the remnants of an old volcanic ridge, Edinburgh truly is the gem of Edinburgh. The site of Edinburgh Castle contains evidence of human habitation since the 9th century B.C., and there has been a royal castle here since the reign of David I in the 12th century.  The castle continued to be a royal residence until the Union of the Crowns under James I in 1603. During it’s formidable years under the Scottish crown, the castle was a near impregnable fortress. However, after the Union of the Crowns the castle began to be used primarily as a prison for the empire. Beginning in the 19th century, the castle’s importance as a historical monument was recognized, which shaped the castle we see today. The castle is extremely big and feels as though you’re in a small village inside.

Did You Know? Edinburgh Castle used to serve as a military garrison housing many POW’s during the American revolution.  Many American soldiers were once imprisoned in this mighty fortress. 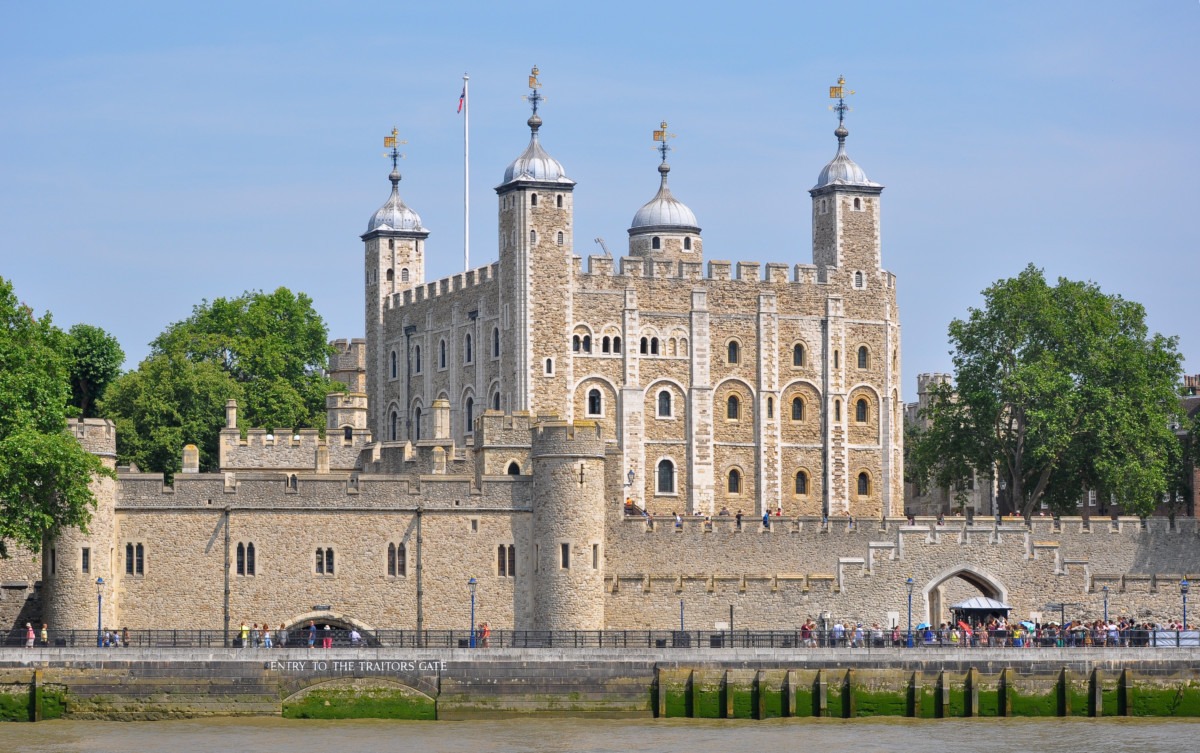 The Tower of London, officially ‘Her Majesty’s Royal Palace and Fortress’ lies on the north bank of the River Thames, and dates back to the Norman Conquest in the 11th century. While beginning life as a castle, and technically still considered one, the stronghold took on a very different role than that of a castle centuries ago. The central white tower building, from which the fortress received its name, was built by William the Conqueror in 1078.

From its inception, the fortress doubled as a royal residence and state prison. The Tower remains one of Britain’s most famous and most visited tourist attractions largely from its days as a prison, which saw some of Britain’s most notorious figures, like Anne Boleyn. The grounds include a number of museums and exhibits featuring artifacts from British history, with the center piece being the crown jewels.

Tip: The Tower of London offers great views of the beautiful Tower Bridge spanning over the Thames.  Perfect for a good photo opp! Caernarfon Castle is a medieval masterpiece envisaged by King Edward I in the late 13th century in order to pacify the unruly Welsh. Edward I had built a number of these fortifications throughout Wales, which still dominate the landscape today.

Located in the Northwest area of Wales, the castle walls appear to have a Roman look. This is no coincidence. The area around Caernarfon has strong links to the Romans, with the fortress of Seguntum located just miles away. Edward I wished to emphasis this connection with Rome and sought to imitate the great walls of Constantinople (the unreachable city now modern day Istanbul).

The main draw for me was the size, and access to every part of the castle.  And this castle is so large and filled with so many multilevel passageways you’ll swear you were in a medieval movie!

Did You Know? Caernarfon Castle is an open tourist attraction which allows visitors to wander in and out of any passageway they wish! Windsor Castle is the official residence of Queen Elizabeth II, second only to Buckingham Palace in London. Windsor Castle is located just a few miles outside London, and holds the title of largest castle in Britain. The fortress dates back to the reign of William the Conqueror.  Since the 11th century, the castle has been an official residence of the English monarchs, making it the longest occupied palace in Europe.

From the reign of Henry I started the age of gradual reconstruction of the castle from its simple design to the magnificent form it now possesses. Much of the castle is off limits, however you are allowed to roam the grounds, and certain rooms when the Queen is not in residence.

Did You Know? If you are standing in the right place in the courtyard at the right time you are able to witness the Queen eating breakfast in the iconic circular tower. When I think of the medieval castles I learned about in grade school I think of Warwick castle.  The typical rectangular shape lined with circular towers on each corner, with a large fortified entrance where a defending army could pour boiling water all over you. Not as big as some of the other British castles, but the historic ambiance is well worth the trip.

The present castle dates back to the 12th century, however it was first begun under the reign of William the Conqueror. It’s 14th century additions offer some of the best examples of medieval military architecture in the whole country.

The castle remained a fortress until the early 17th century, when it was bequeathed to Sir Fulke Greville, who turned the area into his country house.

Did You Know? The Greville family became earls of Warwick in 1759 and retained the castle until 1978 when it was bought by heritage foundations. Stirling Castle stretches back to the 12th century, when King Alexander I of Scotland dedicated a chapel on a nearby hill.  The castle oversees the site of the legendary battle of Stirling bridge.

Just across the narrow river, looming on top a small hill, sits the Wallace Monument. A simple yet beautiful tower peers out into the Scottish countryside, keeping watch over the land while reminding passer-by’s of great Scottish freedom fighters like William Wallace.

Any visit to the castle ought to be accompanied by a visit to the Wallace Monument, which gives a great narrative of the events surrounding the Scottish hero, and which also houses William Wallace’s sword.

Did You Know?  A famous battle from the movie Braveheart took place near here.  The Battle of Stirling Bridge was a famous battle fought between William Wallace and English forces in which Scottish countrymen defeated well equipped and trained English soldiers against overwhelming odds. Another one of Edward I’s great architectural triumphs, Conwy Castle is one of Europe’s great medieval castles. The castle’s eight towers and high curtain walls impressed any visitor, dignitary, or army that came calling. The castle proved a strong and reliable stronghold against local resistance, and in the years after the Civil War in the mid-17th century the castle was left to ruin for fear of it falling into the wrong hands.

Artists began to flock to the site beginning in the 18th century for its majestic beauty, and restoration work began in the 19th century.  Conwy Castle and the surrounding fortified town of Conwy are beautiful sights and absolutely worth a visit.

If you love castles then be sure not to miss Caernarfon Castle Harlech Castle (another Edward I castle) nearby. You can get highlights, hours, pricing and directions in your personal travel guidebook to Britain.

Did You Know? The castle is now kept up by local tourism, and sees hundreds of thousands of visitors each year. Built following the Norman conquest in 1066, Alnwick Castle was constructed to protect England’s borderlands from Scottish invaders. The castle is located in Northumberland, England’s northernmost county bordering Scotland. Through years of military engagements and family entanglements the house finally came under the ownership of the Percy family, the Dukes of Northumberland, who own the castle to this day. If you are in Northern England then make sure to stop by the beautiful and historic Alnwick castle.

Did You Know? Alnwick castle is perhaps most famous for its use as a set for many popular movies such as Mary Queen of Scots, Robin Hood Prince of Thieves, and several of the Harry Potter films. Bodiam castle, located in East Sussex, was built in the 14th century in order to fend off an invasion by French forces during the hundred years war. Lacking a central keep, the castle’s chambers were built along the exterior wall.

The castle is surrounded nearly on all sides with water, adding an additional burden to an invading army. The castle passed through many generations of the family until their line became extinct. Over the next couple hundred years the castle passed hands often, and did not come under the guardianship of the National Trust until 1925. Bodiam castle stands a testament to medieval architecture, and serves a marker for a very important time in English history.

Did You Know? This started the age of gradual reconstruction of the castle from its simple design to the magnificent form it now possesses. One of the best castles in England, Scotland, and Wales is Cardiff Castle, one of Wales’ leading heritage attractions and a site of international significance. Located within beautiful parklands at the heart of the Welsh capital, Cardiff Castle’s walls and fairytale towers conceal 2,000 years of history.

Cardiff Castle is a unique blend of different architectural styles. Although mostly Norman, there are still Roman parts to it, as well as Gothic-Victorian parts, built in the 19th century.

Did You Know?  Cardiff Castle was used as a raid shelter during WWII from incoming German bombers.

Don't miss out on anything during your trip to Britain.

Your personal travel guide is customized completely to YOU – and sourced from local experts – so you feel comfortable knowing you’ve got the best information.

Learn More
PrevPreviousWhy Travel Should Be Part of Your Self-Care Routine
Next6 Tips for Better Business TravelNext
How can Guidester help you?
We custom-build digital travel guides, so you can get the most from your trip to Europe.
Build My Guide

2 thoughts on “11 Best Castles in England, Scotland, and Wales”